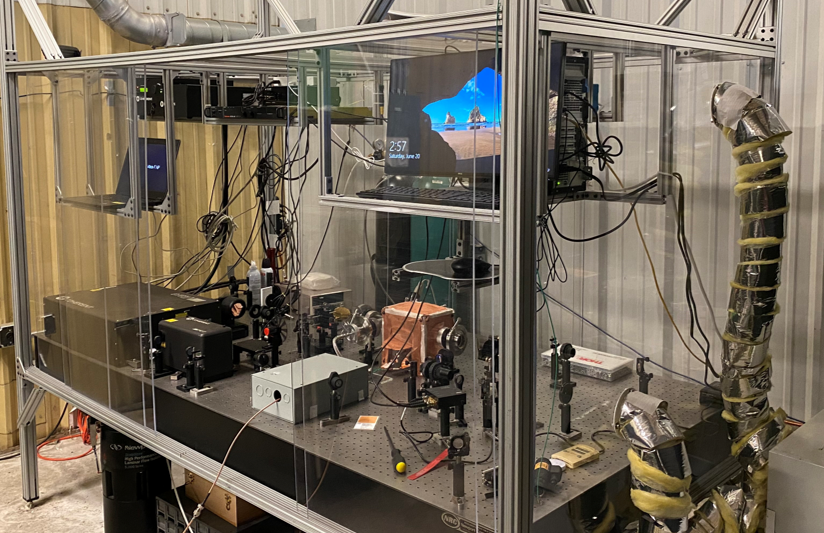 A Coherent Vitara-T HP ultrafast Ti:Sapphire laser generates 800-nm, 30-fs pump pulses that illuminate a Menlo Systems gallium arsenide (GaAs) photoconductive antenna (PCA) to generate THz radiation. The brief optical excitement of the semiconductor substrate by each pump laser pulse frees charge carriers that are subsequently accelerated by an applied voltage bias to create transient current with frequencies in the THz regime. The resulting THz radiation pulses are coupled to air with a hyperhemispherical silicon lens and then collimated or focused into the relevant plasma with off-axis parabolic mirrors (PM).

Once through the plasma, the THz pulse is focused onto an EKSMA Optics nonlinear zinc telluride (ZnTe) crystal such that it copropagates through the crystal at identical orientation and polarization as the probing femtosecond laser pulses. Birefringence induced in the crystal by the electric field of the THz radiation slightly elliptically polarizes the probing laser pulses in a manner linearly proportional the THz field strength. The induced ellipticity is then measured by passing the probing laser pulses through a quarter-wave plate (λ/4), Wollaston prism (WP), and balanced photodetector.

The quarter-wave plate acts as a compensator for the natural birefringence in the ZnTe and shifts the polarization of the laser pulses from nearly linear to nearly circular; the Wollaston prism splits the nearly circularly polarized laser pulses into constituent linearly polarized components; and the photodetector compares the relative intensities of the components to determine the laser pulse polarization ellipticity and, thus, THz field strength.

The arrival of the probing laser pulses is scanned across the approximately 200-ps THz pulse by a mechanical delay line, thereby resolving the THz pulse in smaller than 0.1-ps increments. Laser pulse broadening caused by group velocity dispersion (GVD) incurred through the setup is accounted for with a Coherent CPC-II pulse compressor. A chopper and Zurich Instruments MFLI lock-in amplifier are employed to improve the signal-to-noise ratio. 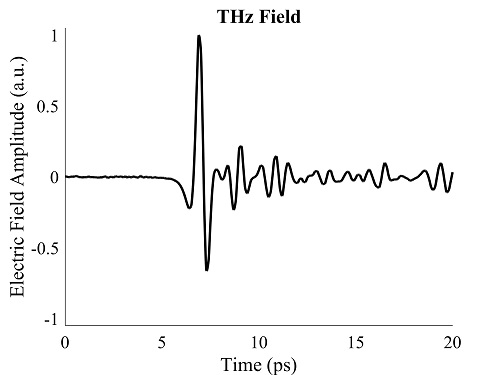